And the Winner is…

Wilson won our competition during week six when we both created a lineup using the same available players (see previous post).

My pick for quarterback, Christian Ponder, scored more fantasy points than Wilson’s pick, Kevin Kolb. One on one, Ponder beat Kolb by about 8.5 fantasy points.

Wilson and I both picked Brandon Lloyd and A.J. Green as two of our wide receivers. My other wide receiver was Brian Hartline, which I knew was a risky pick. He ended up scoring me zero points. Wilson’s wide receiver, Chris Givens, fared much better scoring him 9.83 points.

Just based on our quarterback and wide receiver picks, Wilson would have still won our competition 60.05 – 58.88.

Wilson and I both picked LeSean McCoy as one of our running backs. Wilson picked Alex Green as his second running back who scored about two points more than my pick, Mikel Leshoure.

Based on our picks for quarterback, wide receivers and running backs, I would have won our match-up 79.08 – 78.15.

Wilson picked Phil Dawson as his kicker. In the interview last week, Wilson said, “I probably should have gone with Akers…” Well he was mistaken. Dawson ended up being a better choice than Akers, scoring seven more points than Akers, who was my pick.

Taking into account all positions except our defenses, Wilson would have won our match-up 92.45 – 87.68.

I will create my lineup as usual and then we will see who put together the better lineup based on how many fantasy points each team scores. 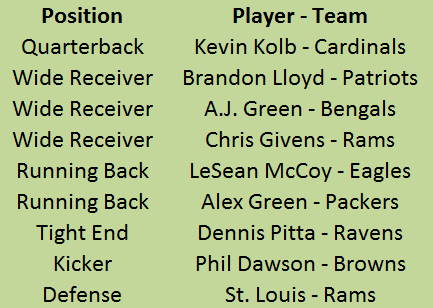 Wilson’s explanation of his picks:

“I picked Kevin Kolb of the Arizona Cardinals because their match-up this week is the Buffalo Bills. The only threat that Kolb has is the pass rush,” Wilson said. Two of the Cardinals’ starting running backs are out, so it’s a safe bet that Kolb will be throwing the ball, according to Wilson.

“LeSean McCoy was the best [running back] available to me,” Wilson said, “I had him last year and he did very well. I think he is a solid starter.”

“I picked Alex Green… because [Green Bay’s] starting running back, Cedric Benson, went down and Mike McCarthy [head coach of Green Bay] recently said he was going to start Alex Green over James Starks,” Wilson said. Green is healthy and the Packers’ offense is looking for a change of pace, which is why Green may be a good starter, according to Wilson.

Wilson picked A.J. Green, Brandon Lloyd, and Chris Givens for his wide receivers. “A.J. Green is Andy Dalton’s number one target and he’s a great route runner. They are playing Cleveland. Anyone that plays the Browns has got my vote,” Wilson said.

“Brandon Lloyd is a solid wide receiver and I think he is only going to get better throughout the season because this is his first season with the Patriots,” Wilson said.

Wilson picked Givens, “Strictly because Danny Amendola has an injury and is out for the next six to eight… weeks. Givens is going to be the guy that comes in and takes that spot,” Wilson said.

Wilson chose Dennis Pitta as his tight end. “There was not a great stock of tight ends to pick from. I wasn’t going to pick Fred Davis. I don’t like the Redskins,” Wilson said. “I just went with Pitta.”

Wilson chose Phil Dawson as his kicker. “I don’t know why. I probably should have gone with Akers, but I went with Dawson just because he’s a really good kicker even though he’s with the Browns. I don’t think it’s going to be a high scoring game. If Cleveland and Cincinnati do get tight, I think Cleveland’s offense is so inconsistent the best they can do is get in field goal range,” Wilson said. That’s where Dawson comes into play.

“For defense I went with my St. Louis Rams,” Wilson said. “This is just based off last week’s game against the Cardinals even though the Rams aren’t going to be playing the Cardinals… they are playing the Dolphins, but that’s close enough for me. I’m just going on the match-up on that one.”

My explanation of my picks:

I picked Christian Ponder as my quarterback this week because the Vikings are up against the Redskins. The Redskins’ defense is ranked 25th in the National Football League according to CBS Sports. Based on that, I think Ponder will have a strong performance this week.

I chose wide receivers Brandon Lloyd and A.J. Green for similar reasons Wilson did. I think they are consistent fantasy players and I trust their performance.

I went with Brian Hartline as my third receiver, which is a risky move. I chose him because Brandon Marshall has a bye this week and Santana Moss is useless. I had no idea which wide receivers in the free agent market were worth picking up, so I decided to stick it out with Hartline.

I picked LeSean McCoy and Mikel Leshoure as my running backs. McCoy has been a solid starter for me so I chose to keep him in my lineup. Then, I had to pick between Leshoure and Alex Green for the second running back. I chose Leshoure because Green is up against the Tennessee Titans, who have one of the best defenses in the league. I think Leshoure will be able to score more points against the Eagles’ defense.

I decided to stick with Fred Davis as my tight end. Although he hasn’t done anything outstanding this season, he has been consistent and I think he is a safe pick.

I chose David Akers as my kicker. No matter who Akers is up against, the 49ers rely on him to put points on the board.

I chose Arizona’s defense this week because they are playing the Buffalo Bills. The Bills are probably Arizona’s easiest match-up this season. I doubt the Bills will be scoring much against Arizona.

Gearing up for Week 5

After week four, my fantasy record is 2-2. Coming up on week five, I am finally getting the hang of how to create a strong lineup. Here are some basics for you other newbies out there.

First, check which players have a bye-week and bench them.

For example, this week my running back Mikel Leshoure from the Detroit Lions has a bye so he is going on the bench.

Next up, check your roster for players who are injured. The Bleacher Report has an injury report every week. Also, check out Fantasy News which has a live Twitter feed for more up to date information about player injuries.

Here is the injury report for my players this week:

After checking my injury list, I visit CBS Sports Fantasy News. Here, I read the fantasy analysis for each of my players. This gives me a better idea of their strength as a fantasy player and how difficult their match-up will be that week.

With this information in mind, I start rearranging my team.

Let’s take a look at my running backs this week. Leshoure has a bye so that leaves me with McCoy and DeAngelo Williams. McCoy has been strong so I will definitely start him. Williams has been doing poorly this season and he has a tough match-up against the Seahawks this week. Since Williams looks like a weak choice, I am considering dropping him and picking up a new running back.

If I want to pick up a new player, first I check which running backs are still available in my league. Then, I visit several waiver wires to get advice on who is worth picking up. Here are some wavier wires I’ve found useful:

After some research on various waiver wires, I decided to drop Williams and pick up running back Cedric Benson from the Green Bay Packers.

After some further rearranging, I have created my lineup for week five, which you can see below. 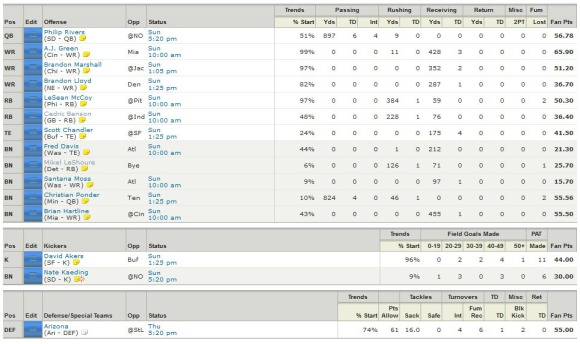 This week I had to make a tough call; start San Francisco 49ers’ quarterback Alex Smith or San Diego Chargers’ quarterback Philip Rivers. Smith was up against the Minnesota Vikings this week and Rivers took on the Atlanta Falcons.

I was torn. Rivers is a better quarterback; however, I worried about the Falcon’s defense. Although I thought Smith would be a risky choice, I had a feeling he might have a good game against the Viking’s defense.

Fantasy lesson learned: it’s not necessarily about the player’s talent that matters in fantasy football, it’s about the quality of the match-up.

I am also learning there is nothing more frustrating than when your players on the bench score more points than your starting players.

Recognize the importance of a kicker. Most players underestimate the kicker’s impact on a fantasy team; however, they can make or break a team. “I won by seven points last week. My kicker, David Akers, scored me 18 points, while my opponent’s kicker only scored him four points,” Webster said. If not for Akers, Webster may have lost his last game.

Pick up free agent players. Picking up free agent players is key to a successful fantasy season, according to Webster. Last season, Webster picked up wide receiver Victor Cruz in week three. “I needed a receiver because my receiver got hurt… so I picked up Victor Cruz. He exploded and ended up being a fantasy dream,” Webster said. Webster suggests keeping a close eye on free agency players throughout the season.

Include players that are playing against weak teams in your lineup. For example, if you have an offensive player who is matched up against a team with a weak defense, you should include that player in your lineup. They are more likely to score you points, Webster said.

Do not include your offensive players and your defense in your lineup if they play each other. For example, on one of Webster’s fantasy teams, he has the 49ers defense and the Lions quarterback, Matthew Stafford. The 49ers and Lions played each other on September 16. “I want my defense (the 49ers) to score a bunch of points, but I also want Matthew Stafford… to score a lot of points. You can’t include them both in your lineup… because you want them to both do well,” Webster said. In other words, if the 49ers defense did well, chances are Matthew Stafford did not score many points.

Do not include players from the same team in your lineup. “Say I have a receiver from the Cardinals, like Larry Fitzgerald. I won’t play another receiver on the Cardinals because you don’t want them to compete for points,” Webster said.

Include a quarterback and a receiver from the same team in your lineup. Scratch the above rule when it comes to quarterbacks and receivers on the same team. “I have Calvin Johnson from the Detroit Lions and I have Matthew Stafford as a quarterback, so I’ll play them together,” Webster said. If your receiver makes a catch, he gets points, and your quarterback gets points for making the throw.

Check your lineup for injuries. Sometimes during the week, one of your players will get hurt or benched for one reason or another, Webster said. If a player is not playing one week, you can be sure he will not score you any points.